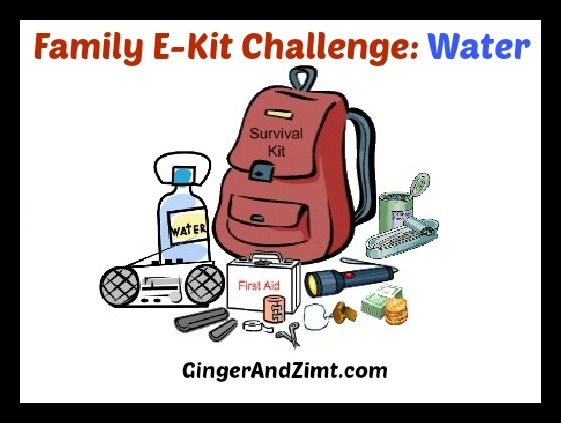 Join me in my Family E-Kit Challenge (inspired by The Great Shakeout)  where we will build family emergency kits in easy weekly steps!  This week’s challenge is to collect three days worth of water (1 gallon, per person, per day) for each member of your household. That is 3 gallons of water, per member of your household (don’t forget pets)!  This will get you started with the minimum water recommendation.  If you are up to a greater challenge and have the space for storage, the full recommendation is to collect two and a half WEEKS worth of water.  Post your weekly progress in my comments section or post about it on your blog and link back here. 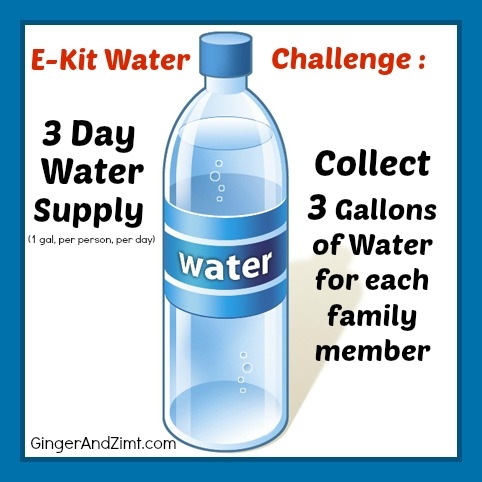 October 17th marked the 26th anniversary of the 1989 Loma Prieta Earthquake that rocked San Francisco and reminded Californians that we lived in the heart of Earthquake Country and it was about time we took that seriously.  I was a HS Sophomore at the time and lived with my mom in a condo on the peninsula, south of the city.   Earthquakes were a normal occurrence that I actually found to be fun.  And, why not?  In my 15 years of earthquaking experience, I had never felt anything over a 4-something on the Richter Scale.  That’s just enough for a bit of tummy tickling excitement but not enough to cause any damage.  When this quake hit, it was after school and I was home alone, talking to a friend on the phone.  This was A LOT MORE than the usual tummy tickling excitement I was used to!  The phone line went dead.  My bedroom was a loft with a half wall that looked over the living space of our condo, my bed (where I had been sitting) was along this half wall and I remember feeling like I would be bounced right over the ledge, down to the first floor.  There was nothing for me to duck and cover under, plus being way up on the third floor at that moment felt really scary, so I tried to get down the stairs (bad idea) hoping to make it under the dining room table.  But couldn’t.  It was THAT shaky.  I stumbled and fell on the stairs then just sat there and held on to the rail, waiting for it to stop.  The quaking kept going.  It would slow a bit, then get stronger.  It felt like it would never end (they say it was about 15 seconds, but I assure you it was MUCH longer).  I could see furniture bouncing around when I peeked over the rail and I could hear things breaking.  I was sure our home was being torn apart.  It turned out we were very lucky.  The position of our unit resulted in minimal damage, while some of our neighbors’ homes were destroyed.  The Bay Area is built on a combo of solid bedrock and spongy landfill (areas that were once part of The Bay but filled in and built upon).  The bedrock areas handled the quake pretty well.  The landfill areas, not so much.  We lived on landfill.  It’s like JELLO in an earthquake.  …which is probably why it felt like we were shaking for a lot longer than 15 seconds!  The aftermath was bad, but not as devastating as it could have been, had this quake hit in a less prepared area.  We lost two major freeway sections, and there was a lot of damage caused by natural gas line fires.  Buildings fared pretty well, overall, thanks to California’s strict seismic building regulations. We lost power and water for short periods but I don’t remember there being widespread areas of no water or power for any extended period of time.

Nowadays I live in the beautiful Pacific Northwest.  I’ve lived up here since 1997 and while there have been many small quakes, I have not felt a single one in all of my 18 years living here!  We don’t have the series of highly active, sometimes deadly, faults criss-crossing under our city like they do in the Bay Area and throughout most of California.  But we DO have The Cascadia Subduction Zone and if science backed rumors are to be believed, this baby is brewing a quake that will make the devastation of Loma Prieta look like a cake-walk!  Not only will it be hundreds of times greater in expected magnitude, but unlike California in 1989, the Pacific Northwest is NOT seismically reinforced!  Not our homes, our public and commercial buildings, our infrastructure, bridges or freeways.  Very little of it has been modified or upgraded to current seismic code.

So, while I add my name to the 6 month long waiting list for an estimate on getting my home bolted to its foundation, I figured I should take a more active approach to preparing for The Big One that personal history has shown will likely happen one day.  I am following Oregon Public Broadcasting (OPB) and their How To Prepare Guide.  They have a really cool feature where if you are a resident of Oregon, you can type in your address and get an idea of what you should expect after a mega quake in your specific neighborhood.

Be sure to return next week for the next Family E-Kit Challenge!