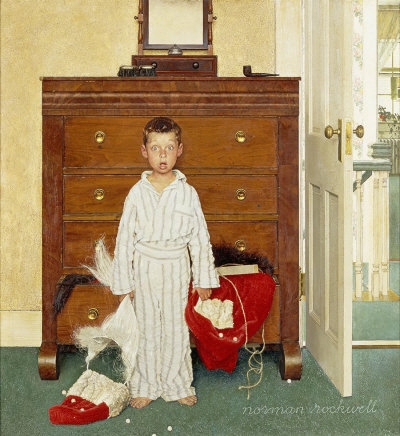 Rosemary (11), has learned of the Magic behind Santa.  She has questioned many times over the past 2-3yrs, but after we talk and I tell her that Santa only exists as long as you believe he exists, she has always dedicated herself to continued believing… Until last weekend when I totally messed up and forgot a box filled with Santa gifts by the computer one night (online shopping and didn’t want to double up on things) and she found them in the morning and questioned me about them.  I stood frozen a moment, processing the likelihood of swapping gifts (ours for Santa’s ) realized I couldn’t… (Santa ALWAYS gives exactly what they ask him for).  I imagined her face that morning if I just let it be and use the intended gifts as if nothing happened… Decided I couldn’t crush her with that understanding on THAT morning.  So I panicked and fessed up!

The first thing she did was threw her arms around me and thanked us (through tears) for being such a great Santa and always making her Christmases special. Then she sobbed for a loooong while while I held her.  I felt HORRIBLE! I kept apologizing for my carelessness. She wasn’t mad for the years of deception.  She felt some non-identifiable emotion over not knowing what was real.  But mostly, her upset was over her present struggles over Growing Up (not wanting to), and this new knowledge only cemented that fact.

I told her everything she ever experienced IS REAL!  Santa IS REAL.  I believe in him!  The Magic behind Santa, is US!  He lives inside each and every one of us and it is our responsibility to spread Santa Magic!  Goodness, Joy, Wonder, Merriment and Giving.  This is all real.  I told her the traditions of Santa are traditions that we (Daddy and I) have practiced our entire lives, even as adults before we had children!  I’ve always left out milk, cookies and reindeer treats as a sort of spiritual offering.  The North Pole represents Winter.  The reindeer and tree represents Nature and our relationship to it.  Santa represents the best of Humankind.  It is ALL REAL.  We may not look like Santa but we ARE Santa and Mrs. Claus!

She is heart broken but also understanding.  She is fully on board with the responsibility of keeping the Magic behind Santa alive for her younger sister, 6yo Lavender.  (Swipes tear)

I wish I had been able to think more quickly, to come up with something else to tell her that would allow her to go on believing as she had.  Last year, she awoke in the night to use the bathroom and caught me in the act of moving Elfie.  I explained to her that Santa needed parents to move the elves because when not at the North Pole, the elves couldn’t move themselves.  She gave me a weird look, seemed disappointed, but chose to accept it and helped us to move Elfie the rest of the season.  At that time, she made it clear that even though she new Elfie wasn’t real, Santa was.

Ugh, I can’t believe it has ended this way! I imagined it would just naturally come about when she was ready.  I feel so bad for her, to be struggling with physically growing up faster than she feels ready, and now to be faced with a very grown-up understanding that will change her outlook on the world… that’s a lot for an 11 year old kid on a hormonally driven, emotional roller coaster!

I’m hoping that by bringing her into the Magic behind Santa as an active participant, she will find a new kind of joy.  That the wonder and excitement of this season will continue to be alive in her heart.

I’d love to hear from you, dear readers. Do you have a similar story to share?

Note: Featured Image is The Discovery by Norman Rockwell.  Downloaded from Pinterest.