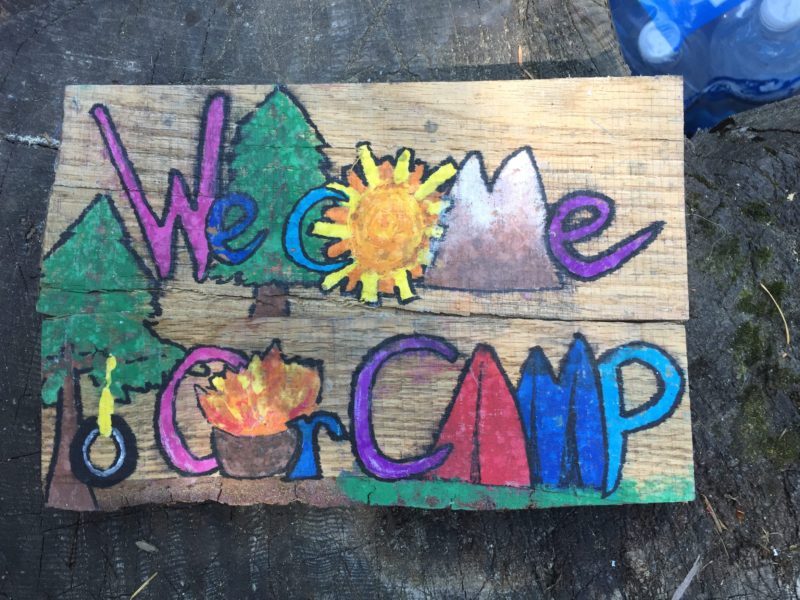 Our favorite Summer pastime is CAMPING and I wanted to share this year’s family camping adventure with all of you!

We go to a TOP SECRET campsite located on the Clackamas River in Oregon’s Mt. Hood National Forest.  If you follow HWY 224 (aka 211, I don’t know why it has 2 names) SE past Estacada, you will come to a corridor of several National Forest Campgrounds all along the Clackamas River.   Most of these are very rustic having only a vault toilet, no showers or running water, no hookups, and only a hand pump for fresh water access.  PERFECT for a family wanting to unplug from civilization and get away!  All in all, the majority of the campgrounds in this corridor are great and you will likely find a site to suit your camping preferences.  It’s only an hour or two from Portland (depending on which campground you choose) so if you are traveling to Portland from out of state and want to try a bit of camping, this is a very doable option!

I am sworn to secrecy and cannot tell you the exact location of our campsite (though I left a few breadcrumbs in my video).  It is a prized gem of a site and you have to book waaaaaay in advance if you want to get it.  You also sometimes have to fight people off who want to invade your precious site because they’ve stayed there in the past, know it’s secrets, feel entitled to use it at their whim, and don’t think they should have to wait in line like the rest of us for their chance to enjoy it.  Yeah, we’ve had a few incidences.

There is so much to do in this district of the forest (Clackamas River Ranger District). Whitewater kayaking and paddle boarding reign supreme in this area and I’ve seen a few Whitewater Rafting Tours that look like SO MUCH FUN!  They go past our camp all day long, and each year we say we’re going to do it…but haven’t yet.  The companies I see most often are : Blue Sky Rafting ,  River Drifters, and Oregon River Experiences.  There are several hiking and mountain biking trails networked throughout the area and there are even marked trails for horses and some for ATVs.  Another fun place to check out is Bagby Hotsprings .  If you’re into fishing, the river boasts great fishing and there are a few lakes scattered around the district if you prefer to fish by boat.

In the video I review a few tents and I’m going to include some links for you so you can check them out for yourselves!

My white Kitchen Tent came from Costco and can be found here.

The second tent that I review is the Ozark Trails 16×16 cabin tent  from Walmart.com.  In the video I mistakenly claim it is a 16 person tent but I was wrong, it is presently labeled as a 12 person tent.  I purchased it on sale for $176 in the off season a few years ago.  While linking this review I saw a new tent that has me swooning!  It is a 4 room cabin tent!!!!  I’m sure it would be even more difficult to erect than my 3 room tent but, Holy Mother of Palatial Heaven, LOOK AT ALL THE ROOM!!!

Our final tent is the Ozark Trails 13×9 Instant Up 8 person tent from Walmart.com.  I also purchased this in the off season a few years ago, at a sale price.

First let’s talk the camp kitchen…. We organized all of our food in bins which helps to keep critters out and food fresh.  I organize based on food type (Breakfast bin; snacks bin; pots-pans-utensils; pantry stuff like seasonings, oils, etc).  You may have noticed all of the coolers I had in my kitchen tent!  We were on a 10 day trip and we organize the coolers in a way to give us the most longevity for the ice.  We have a:

Breakfast drinks cooler
Breakfast and lunch “meats” cooler
Dinner Meats cooler (freeze the stuff for later at the bottom and fresh on top)
Drinks cooler
Veggies, refrigerated fruits, cheeses & condiments cooler
Non-iced, fruit cooler… (be careful though, it will ferment your melons really quickly.  We used to keep our fruit in a ventilated bin with a screen on top but learned the tiny fruit gnats can still get in and eat all the fruit!  This year we tried a sealed cooler, which did protect from bugs but quickly over ripened everything and our melons were fermented!)

To cut down on the chaos and clutter of clothes and bags inside our tents, I found pop-up canvas bins at The Dollar Tree!  I like this option better than using the plastic tubs or drawer systems (popular on Pinterest) because it takes up way less room and is easier to pack in the utility trailer.

Using old rugs and bathmats as floor coverings in the tents feels so much better and keeps things cleaner than using the bare floor of the tent.

I can now officially report that camping with a mellow cat is FUN!  Our indoor cat stayed indoors in our cabin tent and after hiding for most of two days was well adjusted and her normal self by the 3rd day.  We also bought her a pop-up tent of her own and would put her in there while we set up or took down camp.  We bought a harness and leash system… we actually bought three systems but only one worked well.  Despite trying to harness train her prior to the camping trip, our kitty never quite took well to being on a leash and we didn’t feel safe keeping her on leash and out and about the camp site… plus she is a long hair cat and after a 3 min walk around, she was covered in burrs and seeds that we were picking out the remainder of the week.  For a litter box we used these disposable litter boxes.  If you do camp with your cat, be prepared to bring them everywhere you go and remember they need to travel secured in a carrier for proper car safety. Leaving your cat unattended at the campsite while you go off adventuring leaves them vulnerable to theft (it really does happen) or escape in ways you may not have realized…like when they get super excited over a fun moving shadow on the wall and try to attack it, getting their claws stuck in the tent wall and slicing it open as they try to dislodge.  Our campgrounds actually has a resident cat who got lost from it’s family a couple years ago and now lives full time on its own at the camp.

Last, but certainly not least, I will leave you with a short list of Pinterest Inspired Camping Tips that were total failures for us =o)…

Using the mesh, hanging basket tubes (often found in kid’s rooms to store stuffed animals or hang clothes), sounds like a fantastic way to organize things in a camp kitchen!  But the three years I did that, my stuff was invaded by little critters who chewed through everything.  Even when the only food I stored in them were seasonings in sealed containers!  Critters climbing all over towels and cooking utensils is just gross!  I’m calling this hack a FAIL!

Another two years, I collected all of our drier lint and made fire-starters.  I felt so proud of myself being productive all winter prepping for summer camping. Huge waste of time!  They didn’t start the fire any faster than using twigs and pine needles!  I tried a few different methods from just the plain lint, to wax covered lint, to lint in old cardboard tubes.  Fail-fail-fail!

Cooking anything wrapped in foil, buried in coals.  I know the Boy Scouts do it (KIDS!) and apparently Hobos invented it (thus the name Hobo Packs) but whenever I’ve tried it it’s made a huge mess that resulted in inedible food.  This year I was sure I had found a fool proof foil recipe!  We tried french bread pizzas.  It can’t get easier than that!  I read several reviews and none of them were fails so I was sure this would finally be IT!  We let the fire burn down to coals, I wrapped the pizzas in heavy duty foil, put them in the coals for 3min per side as instructed in several Pinterest pins (linked to blogs) and they were burnt BLACK and completely inedible!  I give up.  I am not trying a foil packed meal again!

Hope you found our adventures entertaining and helpful!  And I hope your Summer Adventures are leaving you in a state of Bliss!

Blogging is my hobby, but the new Ginger & Zimt Boutique helps pay the bills!  I invite you to take a visit!