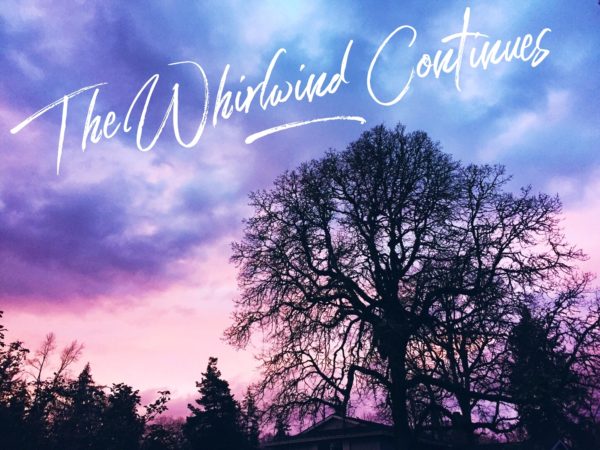 I sit here in mid March, yet in my mind it’s still January, and I continue to be stuck in Life’s whirlwind that began… what, how many years ago?.. and hasn’t let up.  At least it’s a beautiful whirlwind this year!

Since I count my years in school years, I’ll start with September…

School began in September, at which point my life was taken over by “PTA” duties, Jog-A-Thon, and SOCCER-SOCCER-SOCCER. Jog-A-Thon duties extend from September through November (as an executive board, we refer to it as the Torture That Keeps On Giving) and takes up many of my days.  Soccer takes up 4 nights a week and every weekend from September till November.  And in the last week of the month my dear Rose turned 13!!!!  (Faints)  I have no idea how that could have already happened! In October I found my Birth Father! That was a HUGE life event for me and followed years of research and searching and a lifetime of wondering.  Making connections with my biological relatives brought up so many emotions that I still haven’t had time to visit and process them all. At some point I will write a post  about it. My 91 year old Grandmother died in November, the week of Thanksgiving. We traveled to San Diego the first week of December to be with family and attend her funeral, and were able to meet my birth family (in person) during the same trip. It was an incredible and very emotion packed trip! Wearing my Grandma’s Favorite color, RED and poinsettia leggings which match the beautiful Poinsettia tree in her garden.

When we returned home the second week of December, we started falling ill, right in time for Winter Break to begin….

Influenza had descended upon our household! The girls were sick the week leading into Christmas, but recovered without any issues. I was sick for an entire MONTH, from December 15 through January 16th when I rejoined society.  I had a hard time of it and was almost hospitalized towards the end due to complications with asthma. Luckily a hefty course of Prednisone saved me from that fate, though the side effects of that med are not any fun!  And now 3 months later, I’m losing my HAIR as a side effect of severe Influenza! Did you know you can lose your hair following a serious bout of The Flu??? In the past few weeks I have lost between 1/3 to 1/2 of my hair density and it’s still shedding in handfuls. Seriously, if they started using THAT factoid as the selling point for their flu shot PSAs, they would have a MUCH higher rate of compliance! People are willing to risk being sick, but NOBODY wants to lose their hair about 3 months later! The end of January was spent waking up and rejoining the world after being sick for so long.

February was spent celebrating Hub’s 43rd and Lavender’s 9th BIRTHDAYS!  In our family each person gets a full WEEK of celebratory extravaganza so that was most of February! And now we’re in mid March… I need a NAP! Spring Soccer has begun and we’re back to 4 nights of practice and games every weekend. Spring Break and my visiting In-Laws are just a couple weeks away.  I just got Christmas taken down THIS WEEK and I STILL haven’t gotten our Holiday cards out…

I ask myself, HOW does Life speed by so fast?